Amid all the chaos around due to COVID19 and my personal OKRs irreversibly impacted, I’m still trying to get closer to some of the goals. One such is to pick up a new hobby. Though Chess isn’t a new game for me, that’s the only one I played since childhood consistently. I never “learned” professionally or got coached.

So when I’m in search of at least one single “good news” to brighten up my day, I came across this MasterClass | Garry Kasparov Teaches Chess.

Inquisitive, I finished through the trailer, saw some teachings on YouTube by Kasparov to know his style of teaching and immediately plunged on to get access to masterclass (a shared, $ split account). 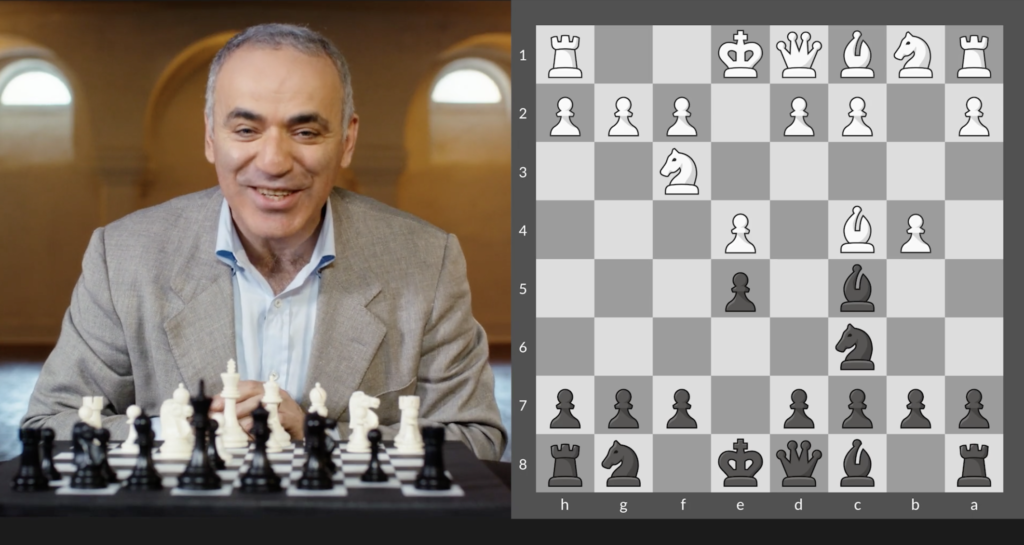 Here’s the notes I took down while watching the first 10 sessions (incl intro) from the masterclass.

Tactic = Knowing what to do when there’s something to do. Short term

Strategy = Knowing what to do when there’s nothing to do. Long term.

Patterns can be recognised only with practise

Double attacks with pan & knight =
a. pan attacks with support from knight. forks.
b. Sacrifice a pawn and next step, fork with the knight

Don’t pan under attack.
With a move you can both save piece + prevent by just a move. Not all visible threats are dangerous.

Create immediate threats + solid configuration. a. Bring rooks together is the instinct. But if our king is in trouble, remember not to ‘a’, but give a check and remove the other rook too from the attack.

You can either
a. Protect
b. Counter attack
Make adjustments.

Amateurs always makes checks. It’s recommended if you are in double attack

Never stop searching for opportunity to create attacks. Looks for tactical opportunities Know the right moment, to use positional advantages to convert into a material advantage

Be comfortable with different patterns

Two elements of double attack
a. Defensive: stalemate
b. Attacking: promote to a rook & checkmate

a. Queen - king in a row. Rook moves to check the king
b. Knight - knight. bishop attacks both knights. Diagonal.

Classical skew:
a. Bishop attacks two pieces
Maximise the effect. The first skew is good. See if you find a better skew

Skew in endgame: Pattern with rooks

Sacrifice to see if you can skew in the next step

Make a move (unblocking) and attacking, while another attack is discovered.

Danger, is we don’t see the piece behind and opens an another piece

Pin + sacrifice for pawn promotion is classic in end games

Pins are mostly in end games, because the pinned pieces can’t be defended due to lack of pieces

Attract with a sacrifice, to deflect opponents gaurd.

Escape a double attack with a sacrifice, creating a skew.

Deflection can limit the potential of a very strong piece too. Pawns in end game: 17:40

E.g: Block the two rooks that are on same file supporting each other. Now, they are at risk.

Kasporav Vs Kamsky 1993
Fischer & Benko 1963
Sacrificed, to block the opponents path with their on piece.

Interference in end games:
Sacrifice pieces to stop the opponent’s rooks for us to promote the pawn to Q.

Too many jobs at once
= A piece supporting two other pieces. So, when the opponent takes up one of those, the support counter attacks and in the process leaves the other piece hanging.

Most effective during end-game mates.
Bottvinik Vs Petrosian 1966

Exchanging favours - trading of pieces of equal values. In most cases the exchange works win favour of only one side.

Eliminate trading / exchange of pieces of equal values if you know who’s going to benefit out of it.

e.g: End games force exchange (with a check to K, pinned) for pawn to get promoted to Q.

Learn rook exchanges to know who has advantage. Dangers could be caused by the exchange suggested by opponents

In End games:
One rook each, important to learn how to safe guard & when to offer/force exchange rooks for our pawn to make unstoppable progress to get promoted to Q at the end.

Queen’s endgame. For exchange with double attack / skew. Get the pawn promoted.

A good trade could be a very powerful trade to advance our position or force for a draw during endgames.

The first 10 lessons are solid. If you are under 1600 FIDE rated, I’d strongly recommend this course for you. I bet the next setup of lessons will dig deeper into more tactics & strategies with some mind blowing games Kasporav played in the past.

I believe only few #1 people in their respective fields can be a good at teaching their mastery to others. Garry Kasporav is one of them.

Can’t wait for the next weekend to complete more lessons.